1939. HMS Ursula. Royal Navy. Silent Service. Famously wet and cold, submariners caught spray over the bows and conning towers on every watch. Legend has it that the commander of the Royal Navy submarine Ursula commissioned a special suit using the well-known English wax cotton material. This became the basis of the post-war trials jackets. 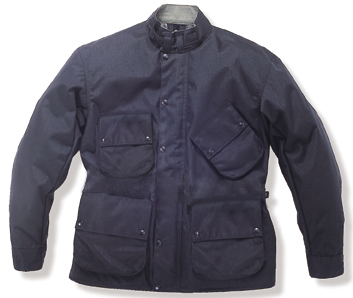 Through the '60s, every motorbike shop had Made in England waxed cotton trials jackets and pants for sale. These versatile mens jackets were used as off-road gear and weather-proof road gear as well as a jacket used by many Cafe Racers. Though the intended use was more English country gentleman, these jackets were prized for their durable and functional good looks. Originally made in England, the market for these jackets really skidded in the mid '70s. With the discovery of North Sea Oil, the English pound rose substantially in value, with the result that many old and famous English marques found themselves priced out of their traditional overseas markets and so were driven to the wall. Some well-regarded and famous names disappeared; Norton, Triumph, and BSA motorcycles all closed. Both MG and Triumph cars shut down. English clothing makers also took a hit.

It is ironic that the resurgence of traditional English waxed cotton clothing came from the Italian market as the jackets were adopted in more or less their original form as retro fashion. Fashion market pricing was higher than motorcycle market price points and was high enough for the English makers to again thrive in this new niche.

The advantages of waxed cotton…

While technically-advanced textiles have become increasingly popular, Vanson has always believed that the traditional family of jackets need to be produced in the traditional way using authentic materials. The Vanson STORMER JACKET is one of the most traditional waxed cotton jackets available today. Every aspect of its creation is craft work - from waxing the canvas to cutting and sewing.

The fact is that waxed cotton is waterproof, lightweight and breathable, all at the same time - a goal not yet fully achieved by modern high-tech laminated textiles. Waxed cotton is a living material, and like all living things, with a minimum of care and feeding it will reward you with great service and a long life.

The degree of water-resistance of waxed canvas is controllable by you and may be adjusted at any time by applying re-proofing compound (AC-WAX), a little warm air (hair dryer) and gentle rubbing-in. This is in complete contrast to modern coated and laminated textiles, in that once they begin to leak (which they all will at some point, perhaps along a seam, perhaps in a heavy wear area), they cannot be repaired.

By creating a weather-proof dead air space around the rider the STORMER will allow inner garments to insulate the rider from the wind, rain and cold with a maximum of comfort. 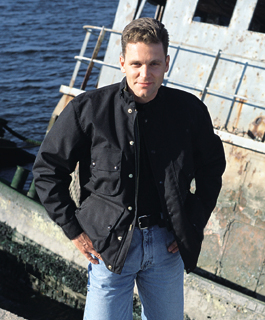 The STORMER features four stormproof reinforced pockets with snap flaps on the front. A double-front windflap system very effectively seals out the weather. A windflap behind the zipper and then a snap-close overflap covering the entire front zipper on the outside form the double storm-flap system. Weather sealing continues in the collar which overlaps, and can be secured by the neck belt. As the collar is a heavy wear area, we line it in the old-fashioned way with leather.

True to its oilskin heritage, the back-lined STORMER is lightweight, water-resistant and breathable. The amount of water-resistance is a function of how much wax is on and in the canvas.

Particular care was paid to the triangular armhole geometry which allows maximum ease of movement. The wrists have cuffs with snaps for a perfect windproof fit.

The two-way heavy-duty solid brass zipper at the center front allows the jacket bottom to be opened up as needed for the most comfortable riding position.

The Vanson STORMER reaches back in time to bring forward a very effective solution for all-season comfort.